“Dated.” “Rugged.” “All dirt.” Ask a Kearny High School student to describe the football, track, and baseball fields at the start of the 2014-2015 school year, and chances are they quipped a similar response. Approached about the same fields at the end of the school year, students enthused “amazing,” “beautiful,” or even, as one student put it, “a blessing.”

Their shift in perception correlates with a $9 million project SGPA recently completed this spring for San Diego Unified School District. A project designed with the students at Kearny High School in mind. A project that in its best of intentions, would clean up the athletic fields and facilities. A project that, in actuality, has rejuvenated the spirits, attitudes, and motivations of student athletes and inspired the community near this San Diego high school campus.

Kearny High School, home of the Komets, now boasts a modern athletic complex – one of the newest athletic fields and facilities of high schools within the San Diego Unified School District . State-of-the-art amenities now enhance this 74 year old campus as the first installment of several campus-wide upgrades due in part with Proposition S funds.

On an uncharacteristically gloomy day in early May, student athlete Zhané Mitchell warmed up for track practice. A senior at Kearny, she reminisced how the old fields were detrimental to the athletes at times, lacking real quality and prone to cause injuries. “The field was uneven, with small, random pocket holes. It was hard on our shins,” she said. Gesturing to the new field, her Coach, Bill Aaron added, “This track is all-weather; it’s smooth, it’s soft, and it’s just a better high-performance track.”

From a surface level, this facility now includes a new synthetic turf track, bleachers, press box, new baseball field and dug outs, new entry plaza with separate home and visitor ticket booths, new concessions, restrooms, and weight room building. But this new sports complex wasn’t just about physical transformations. Beyond the aesthetic upgrades, a shift in attitude has occurred, one that Track and Field Co-Captain, and Kearny senior, Monét Panza, eagerly pointed out. “Not only are we able to perform to the best of our ability on this field, people like to come out and watch us now. It’s done a lot for our program in terms of motivation, drive and spirit.”

This project is more than a success story for Kearny High and its students. It serves as a necessary reminder of how sports, fitness, and team comradery can help shape a young adult. New facilities with modern upgrades can spark interest, improve engagement, trigger participation, and reinforce healthy lifestyles. At a pivotal point in their development and transition into adulthood, teenagers are highly influenced by improvements such as those conceived and developed for Kearny High School. With the proper facilities and foundation to succeed, students will be more apt to adopt beneficial behavioral patterns, leading to healthy and enjoyable habits throughout their lives.

Teens are impressionable young adults, and often favorable group consensus leads to a predetermined thought: I want to be a part of that.

“I’ve never seen so many kids turn out for a track season before. The improvements around our field encouraged students to sign up. Something clicked for them,” said Coach Aaron.

“For my first four years here at Kearny, in the off season, we probably had eight to ten athletes that would work out in the off season. Now, we’re probably around 45 kids that participate in the off-season workout program,” said Football Coach Will Gray. “A lot of it is attributed to the new field and the excitement to play on the field and be part of the team.”

Studies show that persons who are involved with sports or fitness at an early age are more likely to continue an active lifestyle into adulthood and throughout their lives. According to the Mayo Clinic, habits developed in adolescence have the ability to stick for a lifetime. The Mayo Clinic staff supports that “what happens away from home has a direct impact on tween and teen health.”

Exercise is necessary to maintain health, both mental and physical. Sometimes, the challenge is merely tying up one’s laces and getting out there. Enhanced environments typically foster enriching experiences, ones that people generally want to try for themselves. For teenagers, quality athletic facilities can play a huge role in their development and engage them early. Having facilities and fields like Kearny’s, conveniently on campus, also engages them often.

More than mere aesthetic upgrades, the athletic field and facilities improvements at Kearny High School have thoroughly and thoughtfully impacted and enhanced daily lives for those involved, on and off the field. At SGPA, that’s the underlying mission we strive for: to produce thoughtful, intelligent, advanced designs, creating modern and advantageous environments in order to make lasting impressions on an individual’s or community’s life.

The construction is part of a larger effort to upgrade the high school facility as required by Proposition S. Improvements will include accessibility, infrastructure, and technology upgrades. SGPA successfully managed the process of developing consensus with students, community members, district officials, and government representatives on a rigorous design schedule.

When they return to classes in the fall, homecoming will be that much more enjoyable from their brand new bleachers, and the six home games in the evening will most certainly be well-attended. When asked what his first thoughts were upon seeing the project completed, Coach Aaron didn’t hesitate. “Love. Pure, unadulterated joy.” He, along with the whole Komet family, has been waiting for this transformation for a long time – the effects of which are sure to last even longer.

See what Kearny High Coaches have to say about this project: 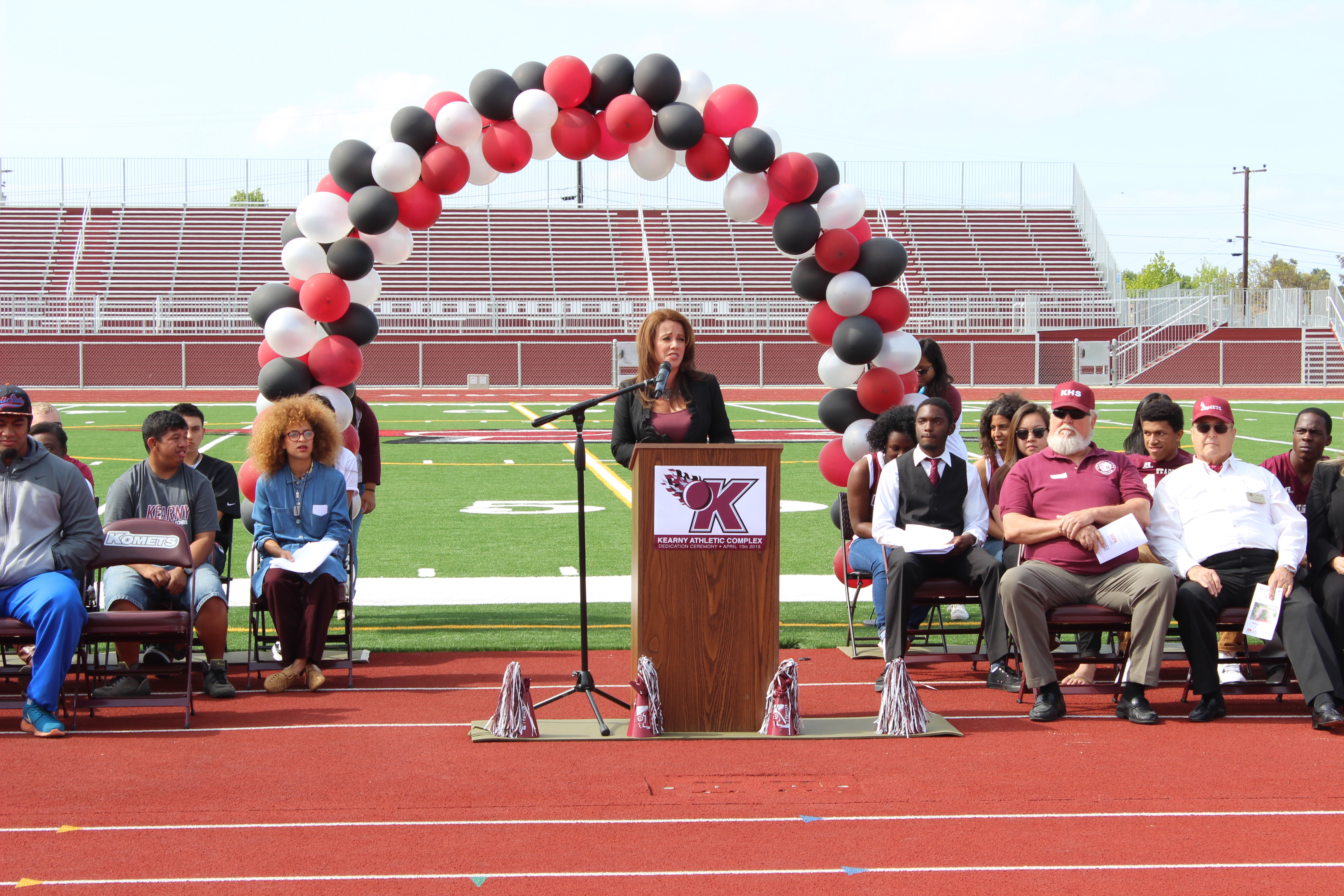 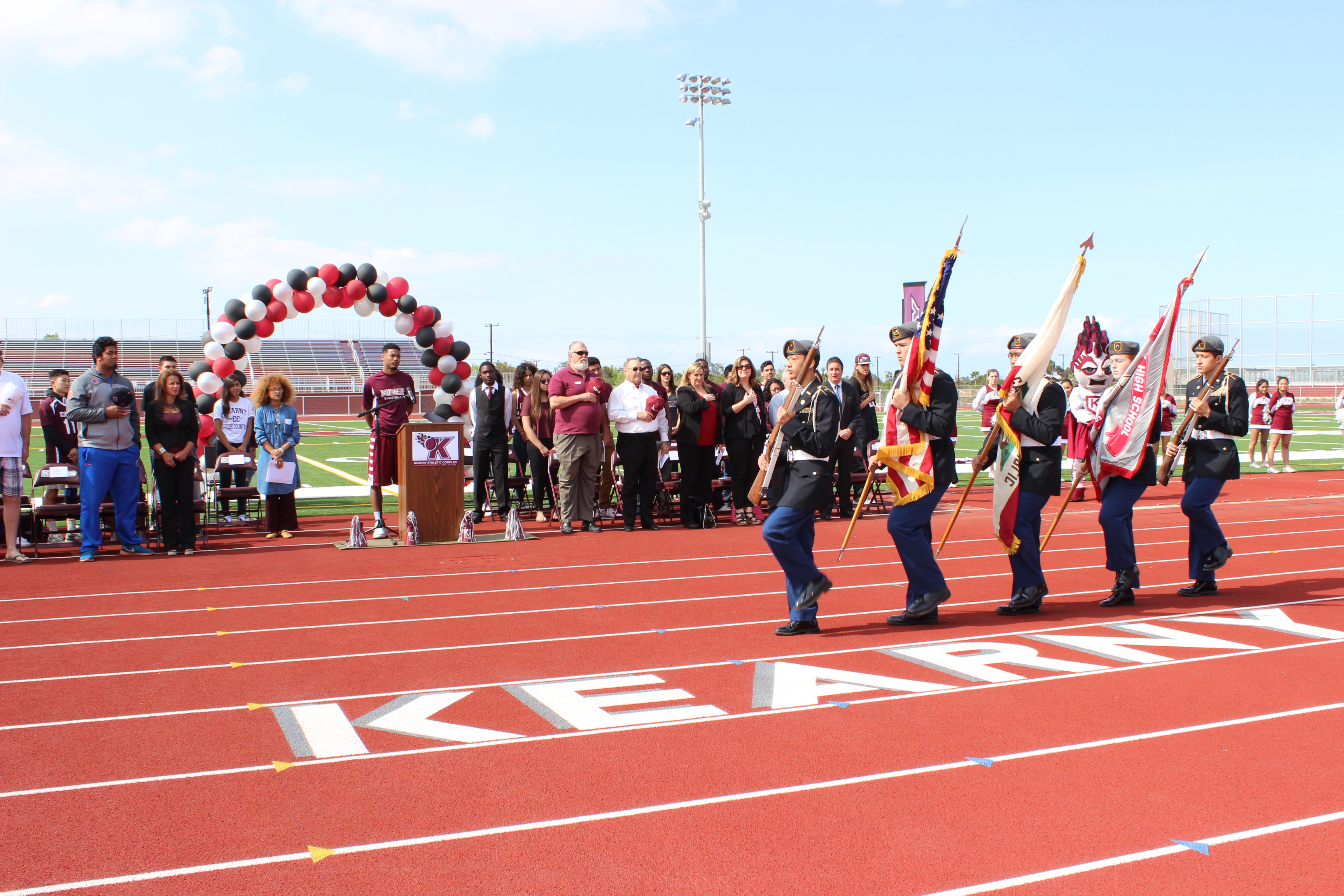 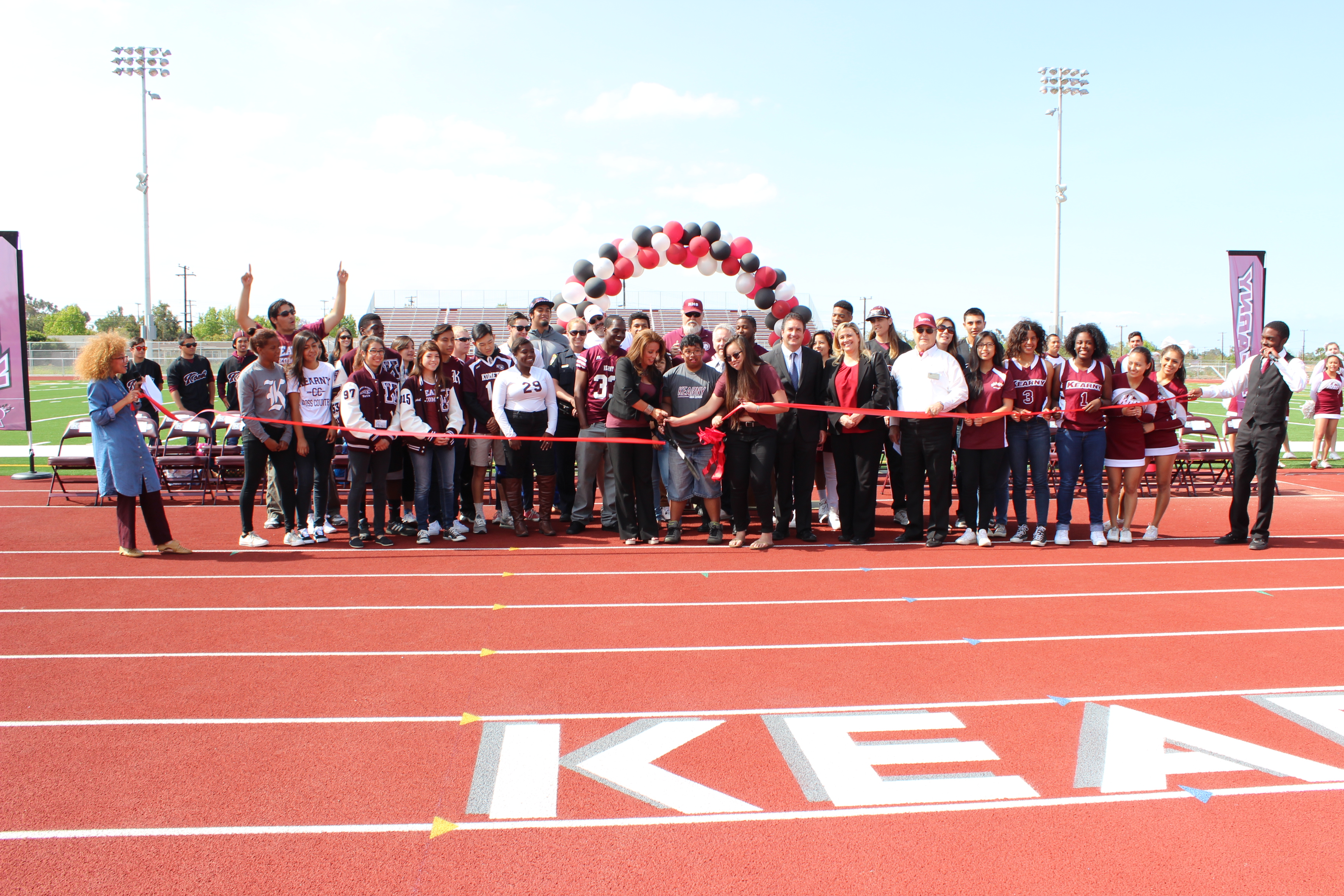 Student athletes and faculty prepare to cut the ribbon at the new field. 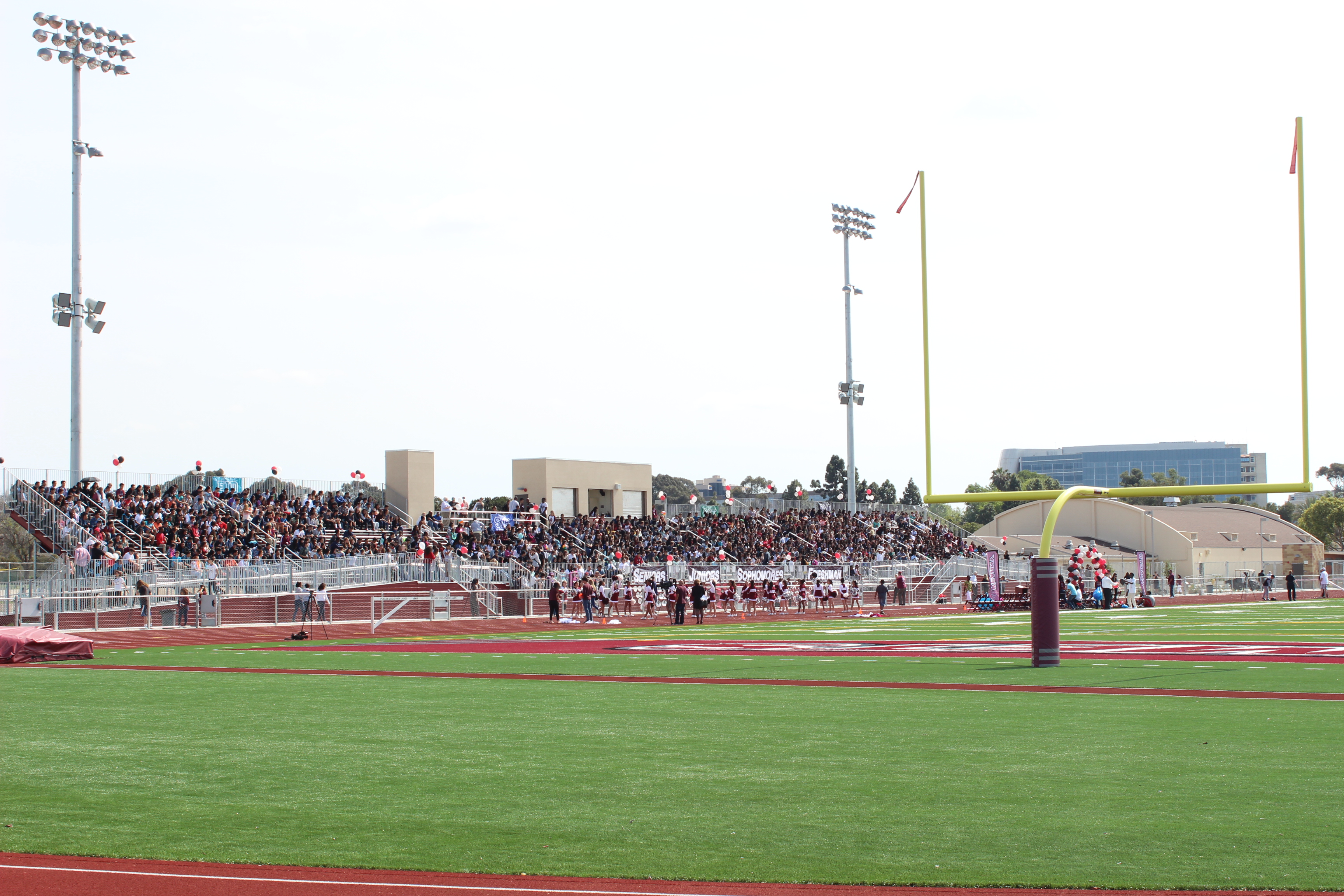 A full crowd in the new bleachers.